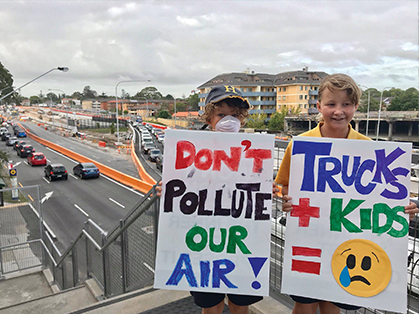 Locals and environmental experts have voiced concerns over plans to build a multi-billion-dollar motorway tunnel to the Northern Beaches.

Community groups, marine biologists, scientists, and local councils all stepped up in September to provide testimonial to a NSW parliamentary inquiry analysing the Beaches Link project.

Over three hearings held last month, residents and experts shared their concerns that the project could have ‘severe’ ramifications for local children, traffic congestion, and the natural environment.

Seaforth local Louise Williams fronted the inquiry as a member of community group Baringa Bush Residents. She says there is ‘significant concern’ among residents about the 3,000 trees to be lost to the project as well as the impacts on local school children.

“Seaforth and Balgowlah will be profoundly impacted. The main construction site is literally across the road from Balgowlah Boys, which is 1,300 kids. That could be their entire high school life with a big diesel truck every one minute or so moving past,” she explains.

“Then, they’ll also be a couple of hundred metres away from the emission stack, as will Seaforth Public.

The inquiry also heard from experts, including Maria Byrne from the Australian Marine Sciences Association, that plans to dredge Middle Harbour near Seaforth to install part of the tunnel could release ‘highly toxic chemicals’ into the water.

Other specialists also sounded the alarm that water flow in local streams and creeks will drop due to groundwater infiltration. They cited modelling included in the EIS that base water flows in Burnt Bridge Creek could reduce by up to 96 per cent.

Transport for NSW says additional modelling and analysis for the Beaches Link project has shown ‘minimal’ impacts on local groundwater, seawater, and creeks.

‘It’s party central’
Northern Beaches Council has voted to continue permitting drinking at Manly’s East...
Council says, ‘Save our hospital’
Willoughby City Council has called on the State Government to cease its proposal to develop...
Harbour tunnel scrutinised
Locals and environmental experts have voiced concerns over plans to build a...
'The scars are local'
Northern Beaches Mayor Michael Regan has called on the State Government to come to the...
‘It will utterly change Neutral Bay’
North Sydney councillors have voted not to endorse the preparation of a planning proposal...

ONLY 5 LEFT
Garden Water Fountain, Save $395