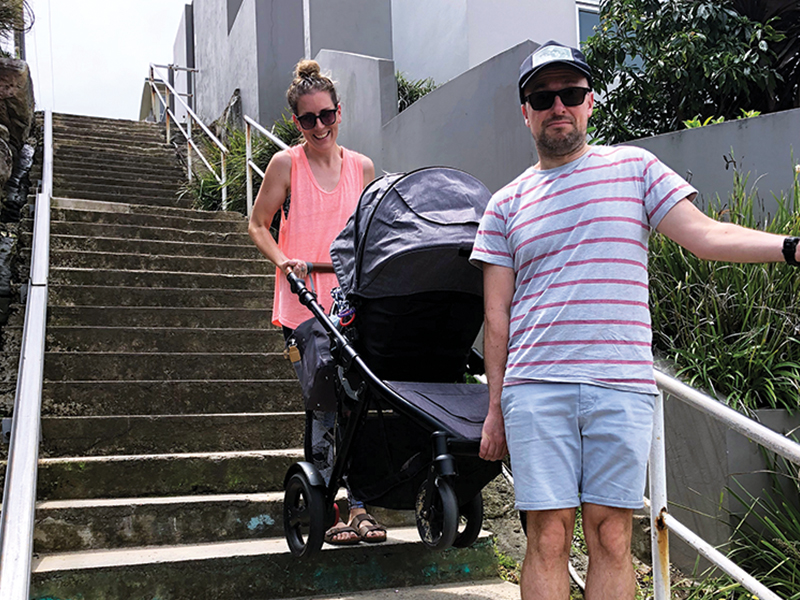 Hundreds of locals have banded together to place pressure on Northern Beaches council to install an accessible walkway across Queenscliff Headland.

To date, 750 people have signed a Change.org petition calling for Council to create a walkway that connects lower Greycliffe Street with the top of the headland.

Locals say the installation of an accessible walkway in the form of a pathway snaking up the headland, an inclinator or a ramp parallel to the existing stairs is essential, as the stair access is currently difficult and unsafe for families with prams, people with disabilities, the elderly and bike riders.

“It’s a world-famous location, Queenscliff Beach. It’s just bizarre anyone with impaired mobility on the headland needs to drive to the beach,” says Paul Oates, committee member of the #BetterAccessforQueenscliff group.

Locals are particularly concerned, as the alternative route to access the bridge requires a 1km walk back up Bridge Street and west on Queenscliff Road to cross at the blind corner opposite 41 – 45 Greycliffe Street.

Despite initially approving the motion for #BetterAccessforQueenscliff and engaging in a four-month investigation and community consultation period, Council motioned to defer the decision on the accessible walkway at the May meeting.

According to Councillor Candy Bingham, the three options presented to Council for accessible access – the walkway, inclinator and ramp – were considered too costly and potentially unsafe.

“Greycliffe Street is a very steep, extremely narrow, very busy street, and the proposal to put a footpath up against the cliff-face of that street we just didn’t think was a safe option,” she explains.

“The other thing too, that option was estimated to cost $650,000 for a very small stretch of footpath and our budget for the whole of the Northern Beaches $3m.”

She said the cost of maintenance for the inclinator and the lack of space for a ramp next to the stairs also presented an issue.

Mr Oates said while he is disappointed with the decision to defer, he remains positive that the widespread community support for the accessible walkway will promote Council to take action.

Celebrating an icon: 90 years of the Sydney Harbour Bridge
The Sydney Harbour Bridge captured the imagination of Australians as a symbol of modernity...
Moving mountains for local wildlife
It’s not every day that six 19 to 20-year-olds decide to take it upon themselves to trek...
The slope to glory
What’s evident upon sitting down to chat with three-time Winter Olympian Sami Kennedy-Sim...
Manly by tram
Although travel to Manly is indelibly associated with the ferry, in the period from 1911 to...
Local literacy icon
Manly’s multi-award-winning author, Belinda Murrell, is striving to create a positive...