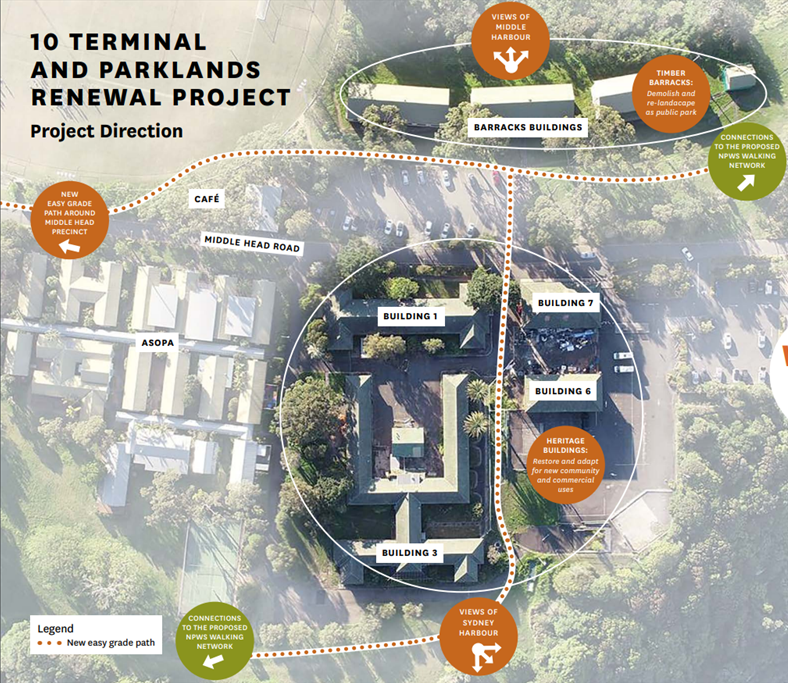 The Morrison Government has announced a $40.6 million injection of funding into the Sydney Harbour Trust, as the agency unveils its draft plans to improve Middle Head’s Terminal 10 site.

The four-year funding, which will be spent on urgent repair works to the historic military sites, was announced in late September as part of the 2020-21 Federal Budget.

The announcement came after an independent review into the trust earlier this year recommended keeping its sites under Commonwealth control and open for public access.

On the North Shore, funding has been allocated to help repair and restore the historic RETORT House at North Sydney’s Sub Base Platypus.

This coincides with the trust announcing plans for additional foreshore parkland at the sub base and the readaptation of the former Torpedo Factory.

Meanwhile, $4m was also earmarked in the budget to decontaminate the Terminal 10 buildings at Mosman’s Middle Head.

Days before the funding announcement, the trust unveiled a $16m proposal to transform the disused buildings overlooking Middle Harbour.

Under the proposal, three two-storey barracks buildings will be demolished and re-landscaped as a public park.

A new, easy-grade walking path through the precinct would be installed, while the heritage buildings would be restored as potential exhibition spaces, food and beverage outlets, and education or meeting facilities.

The proposal says commercial tenancies will be ‘considered in discrete spaces’ but accommodation use is off the cards.

President of the Headland Preservation Group, Jill L’Estrange, says while the vision for the Terminal 10 ‘generally aligns’ with the group’s view, a heritage interpretation centre would improve the public amenity.

“Middle Head’s unique combination of indigenous, military and environmental values must be addressed,” she says.

“There [also] needs to be somewhere for visitors to understand the geographic layout of Middle Head, including Headland Park, Chowder Bay, the adjoining NPWS [National Parks and Wildlife Service] parkland and historic sites, and 10 Terminal itself.”

Community consultation on the revamp will take place later this year.

Keeping angels on earth
Bayview’s Samantha Hollier-James is a charity powerhouse, founder, community leader and...
The row of a lifetime
Louis Hugh-Jones and three of his North Shore friends turned a crazy pub idea into a...
Moving mountains for local wildlife
It’s not every day that six 19 to 20-year-olds decide to take it upon themselves to trek...
Celebrating an icon: 90 years of the Sydney Harbour Bridge
The Sydney Harbour Bridge captured the imagination of Australians as a symbol of modernity...
The slope to glory
What’s evident upon sitting down to chat with three-time Winter Olympian Sami Kennedy-Sim...