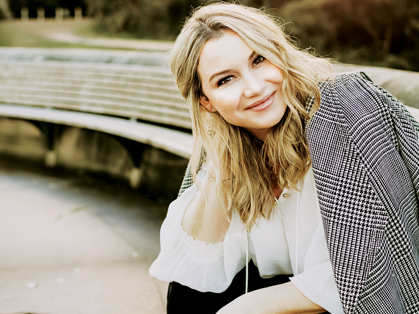 “People say, ‘The days are long but the years are short’, and I think any mother can attest to that,” reality TV star Hannah Ferrier smiles.

Of course, the Mosmanite made a name for herself as the chief stewardess on the Bravo hit series Below Deck Mediterranean. But for the last eight months, she’s had a new title, ‘Mum’.

The vivacious boaty has settled down on the lower North Shore with partner Josh and their baby girl Ava, after a whirlwind five seasons, in which she described herself as being “a ping pong ball between America and Australia”, with press and filming commitments.

And while she thrived in the fast-paced lifestyle, being someone “who has to always be busy”, the idea of settling down started to become more and more appealing.

“I remember going to the south of France before we started filming in Mallorca and I was at a table with a friend of mine from the States. It was 1am in the morning and there was Dom Perignon everywhere and some famous DJ on the decks, and I was just like, ‘I want to go home and read a book’,” she laughs.

This readiness to start a new life provided the silver-lining during a dark time in which she was controversially axed from the show for bringing undeclared medicine on board the luxury mega-yacht.

“It was really upsetting at the time, especially after being on the show for so many years, and knowing that it wasn’t a hidden fact that I suffered from anxiety and had anti-anxiety medication,” she tells North Shore Living.

“It wasn’t like I was trying to be sneaky or anything like that. Nobody has ever declared medication when they’ve gotten on a boat.

“I didn’t like that it was presented as I had drugs on  board because I don’t like that stigma – anxiety medication is for a mental illness, so it shouldn’t be painted like, ‘You’re a drug addict smuggling drugs on board’.

“If you’re caught with cocaine or ecstasy then that’s horrible and you deserve everything you get. But people who’ve never had to use anti-anxiety medication don’t understand that when you take that medication when you have anxiety, it keeps you at a normal level.

“So, it was sad that it ended that way after so many years – but the response I got from people suffering from anxiety was amazing. So, the actual awareness and help that it gave people I think was more important than the negative effects it had on me.”

Hannah has found a number of ways to keep herself busy - and not just with the little one.

She hosts a successful podcast that started when she discovered all her old “hilarious and awful” diaries after her latest move, and has evolved into Bravo reality TV chat, with a new guest every week.

Like her new e-commerce venture Bugs Off, that’s just a side project though, because her main business is the Ocean International Training Academy.

“I get so many DMs from people asking how to get into yachting,” she explains.

“I couldn’t spend so much time with each individual person, coaching them how to get into yachting. So, I built an online training academy for people who want a start in the industry.

“I’ve now got about 300 students and all of the training is online and modulated. It’s the most job satisfaction I’ve had in many, many years, because I’m helping these people that are in tiny little towns nowhere near water, but they’ve seen the show and they want to get out and travel.

“To watch these students go from doing our bronze course to taking the silver course and then suddenly they’re working on boats – it’s like having little ducklings who learn to fly. It’s amazing to be able to do that while being at home with Ava.”

And what’s next for Hannah Ferrier?

“I just finished watching Celebrity Apprentice, and I said to Josh, ‘Out of all the reality TV in Australia that’s the one I would be really keen to do.”

We would certainly watch that!

Celebrating an icon: 90 years of the Sydney Harbour Bridge
The Sydney Harbour Bridge captured the imagination of Australians as a symbol of modernity...
Keeping angels on earth
Bayview’s Samantha Hollier-James is a charity powerhouse, founder, community leader and...
The row of a lifetime
Louis Hugh-Jones and three of his North Shore friends turned a crazy pub idea into a...
Manly by tram
Although travel to Manly is indelibly associated with the ferry, in the period from 1911 to...
Moving mountains for local wildlife
It’s not every day that six 19 to 20-year-olds decide to take it upon themselves to trek...