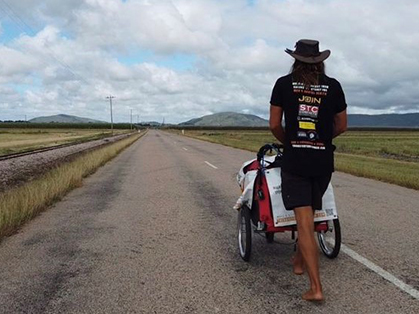 Anton ‘The Barefoot Dutchman’ Nootenboom was warned time and time again as he made his way south to Mackay.

‘Have you heard about the Marlborough stretch?’ They’d all ask. Then they’d go on to explain that it’s 200-odd kilometres of nothingness from Sarina to Rockhampton. No towns, no farms, no people.

The region has an intriguingly dark history, and truckies all have their own stories about ‘The Horror Stretch’.

Anton, who continues his Guinness World Record barefoot walk from Cairns to Manly beach, even talked about his trepidation leading up to it, when North Shore Living last spoke with him.

But now, in late July, having conquered the notorious highway and returned to civilization in Rockhampton, he admits it was actually exactly what he needed.

“For so much of my trip, there has been a lot going on and to have all that time to myself just allowed me to get my own head right again,” he says.

Anton’s trolley has broken down too many times to remember, he has battled on with severe bone bruising in his feet, and sleep deprivation from camping on the side of the bustling Bruce Highway has taken its toll too.

He is also missing his girlfriend, dog, and friends on the Northern Beaches, and simple pleasures such as walking from Queenscliff to Shelly Beach.

But for the first time in a long time, Anton is feeling really good about his progress.
“I feel like I’m going up the mountain now but when I get to halfway, it will be all downhill from there.

Another reason for his ‘renewed energy’ has been the response to his 1km Barefoot Challenge. It has gone viral on social media in support of him and his cause.

People from the Northern Beaches as far as the Netherlands, France and Canada are taking off their shoes and going for a long walk outdoors to help spread the message that men need to speak up when they’re struggling and look out for their mates.

He encourages everyone reading this to get involved.

Simply share a photo or video of the walk or your feet on Instagram or Facebook; use #1kbarefootchallenge; mention @thebarefootdutchman, so he can see your support and share it, and challenge three mates to do the same by tagging them.

More than spreading awareness, it’s also about raising funds for local not-for-profits Gotcha4Life and Tomorrow Man. So, donate if you can!

Be sure to visit Thinklocal.com.au and our North Shore Buy, Sell, Swap and Connect Facebook page for regular updates on The Barefoot Dutchman. North Shore Living is a proud media partner and supporter of this campaign.

Beyond breaking point
When Peninsula Living checks on the progress of the ‘Barefoot Dutchman’ Anton...
Get your spot
Mona Vale Surf Life Saving Club is on the lookout for sponsors to have their name featured...
Providing parents hope
After facing her own battle with postnatal depression, North Shore mum Alexandra Parker...
Lifesavers honoured
Lifesavers from across the Peninsula were recognised for their outstanding achievements and...
Freestyle through the frost
Peninsula Living finds out why the Dee Why Ice Picks is one club worth diving into...