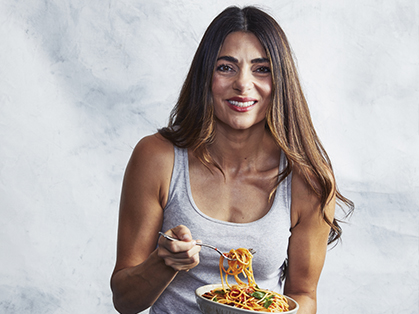 The food writer and home cook sat down with Peninsula Living recently to chat about family, her passions and Christmas, the Italian way.

Food for you has a deep connection to family and home. How did you start cooking?

In Italy, we grow up where food, its preparation, and its consumption, it's just part of a daily ritual. It always creates the opportunity for congregation and for creating new connections. So, I don't remember a time in my life when that wasn't part of who I was and how I expressed my love for family or friends.

But I guess when I moved to Australia about 12/13 years ago, it was my partner [renowned actor Richard Roxburgh], his family and my new Australian friends that found the Italian cooking quite extraordinary. They inspired me to put it down on paper. It was also my mum. At the time, blogs were really popular, and we were missing each other a lot. She thought it could be a nice way to create a family record of all the recipes that otherwise would get lost. It quickly spiraled and turned into something bigger and bigger that I have fully embraced since.

You have since released five Italian cookbooks, including this year’s Simple Italian – the Essentials of Italian Home Cooking. Is there a particular recipe that feels like home to you?

I cook my mum's meatballs very, very often. They're pretty good, I'll be honest, but they're never quite as good. At the start of 2020, my parents were here just before everything turned mad. And before she left, Mum made a huge batch of meatballs and stuffed them away in the freezer. It was about this time last year that I'd been missing her so, so much, and I found the last remaining stash of meatballs. I cooked it, and I burnt it because I forgot about it. My children were like, "But Mum, you know how to make them. Don't worry!" I was like, "It's not the same, though."

I think the recipes are so simple that anyone can make them but, for me, they just come with an extra flavour – the flavour of memory and belonging.

You started your career as an actress and you’re still a professional opera singer. Could you explain how music and performance first came into your life?

I was always the kind of child that would put on the Christmas show with the cousins [laughs]. So, Mum and Dad were very supportive, and they enrolled me into drama school early on. It was only a bit later that I started doing classical singing. I had no prior music training, so I had to really start from scratch. It was really phenomenally hard not having a musical instrument up my sleeve, but I was very determined.

I just love the epic scale of the drama in opera. There’s nothing quite like it.

With Christmas coming up, are there any traditional Italian recipes that you or your family always cook?

When I'm back home in Italy, Christmas Day is frantic because it's all the preparation. You pull out the China and the silverware, and all the crystal glasses from when Mum and Dad got married. It's absolutely full-on. By the time we sit down for lunch, everybody's exhausted [laughs]. But the family would be up in arms if certain dishes weren't presented, like homemade cannelloni or a beautiful roast with potatoes and lots of sauce. And then the desserts – from the classic panettone served with cream, to tiramisu and chocolate salami.

But since being half Australian now, I've introduced my family to pavlova and my dad is just mad for it. He could ditch the chocolate salami and just have pavlova [laughs].

You’ve also hosted popular television programs Cook Like an Italian; Made in Italy with Silvia Colloca; and Silvia’s Italian Table. What else is on the horizon for you?

More of this! Luckily the tale of Italian home cooking and all the joy it brings is bottomless. There are so many stories to tell. Doing this has given me the opportunity to connect with so many other immigrants that share the same love and have so many other stories. So, we just keep sharing them as much as we can. There'll also be more on the music front.

Finally, when you go out to eat on the Northern Beaches, what are some of your favourite spots?

Well, there is no other place I can have coffee but at home, because my husband is the coffee genius of the Peninsula. He roasts his own beans and he's ruined coffee in a café for me forevermore because it will never compare.

But when we want to treat ourselves and have dates, we go to Bert's [Bar & Brasserie]. Pizza at The Newport is also fantastic.

Making a difference through passing it on
Together with his partner Olga and a small but dedicated team, Lavender Bay local Chris...
The Great Depression in North Sydney
In April 2020, the International Monetary Fund declared the worldwide ‘Great Lockdown’...
Youth environmental group sea-ing change
Eighteen-year-old year 12 student Stephanie Evans from Narraweena is the face of Seas of...
Swinging into an inclusive community
Inspired by her son, Marcus, Caroline Ghatt took charge in solving childhood exclusion and...
It's like a zoo in the backyard
Animal lover, Lynette Millet from Bilgola Plateau, has volunteered with WIRES for over 26...