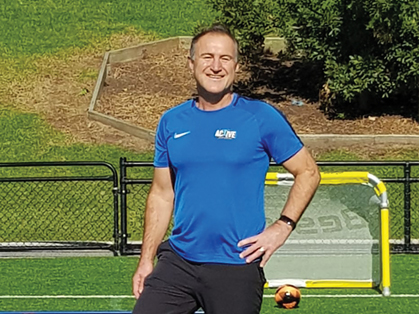 John Tansley is the head of Active Opportunities, a program that helps children with special needs develop their confidence and football skills.

Every Saturday during the school term, local John Tansley heads down to Cromer Park to run the Active Opportunities program.

The program sees children aged between five and 16 years with intellectual needs experience the thrill of kicking a ball and participating in a team environment.

The result of years of hard work, now up to 50 kids participate in the two programs John leads, run in affiliation with Manly United and Lindfield Football Club.

John is practically beaming when he tells Peninsula Living how much he gets out of running the program.

“It’s a real sense of accomplishment,” he begins.

“I never got into volunteering for praise or adulation.

“The feeling of going to the field and seeing the kids having a great time - that’s all the reward I ever needed.”

Coming from a rugby league background, John first got involved in football when his kids started playing in the local competition.

While watching the kids playing on a Saturday morning, he got chatting with a few of the fathers.

“We started talking about the possibility of starting a team in the over-35s competition, then we just went for it.

“Before long, we had grown to ten teams in the over-35s, and I’d become vice president of the senior teams at the club.”

During this time, he also worked to deliver defibrillators to senior fields across the Northern Beaches.

“Getting the defibrillators stations into all the pitches is a project I’m really proud of,” John explains.

“It’s a great feeling to know that we’re protecting the football community from cardiac arrest.”

One day, a flyer on the club’s noticeboard caught his eye. It was for a soccer program for kids with special needs.

His initial offer was to put out some cones and help set up the field, but similarly, it wasn’t long before he was running the show.

“I was just looking at the noticeboard one day when I saw this program being advertised,” John says.

“I thought, ‘Wow, this is a great idea’, and I gave them a ring to ask if they needed any help.

“The organisers were great people, but they had to move on. Then the opportunity for me to step up presented itself.”

For those who know John, it probably wouldn’t be a surprise that the opportunity appealed to him.

It’s clear that the father of seven loves spending time with kids and has strong leadership skills.

“Whether it was my own kids or the ones at Active Opportunities, I just love being around them and feeding off their energy,” John says.

“Leadership comes naturally to me, and I enjoy that role.

“I’ve got a good disposition with people, and I think one real strength of mine is the ability to bring people together.”

If you are the parent of a child who would like to join Active Opportunities, or if you’re interested in volunteering, send an email to info@activeopportunities.org.au.

Miss Harbord 1885
Most readers will know that the suburb and beach to the immediate north of Queenscliff has...
In the driving seat
Northern Beaches local Donna Ball is blazing the trail for female bus drivers on the...
The Great Depression in North Sydney
In April 2020, the International Monetary Fund declared the worldwide ‘Great Lockdown’...
Youth environmental group sea-ing change
Eighteen-year-old year 12 student Stephanie Evans from Narraweena is the face of Seas of...
Making a difference through passing it on
Together with his partner Olga and a small but dedicated team, Lavender Bay local Chris...