On the home stretch 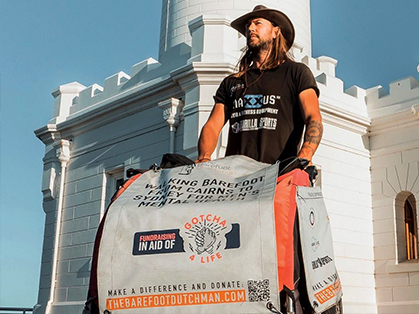 When Peninsula Living catch up with the charismatic ‘Barefoot Dutchman’ Anton Nootenboom in September, we find just outside stunning Coffs Harbour.

With over 2,000 kilometres completed on his momentous trek from Cairns to Sydney, Anton Nootenboom is officially a Guinness World Record holder.

The mental health advocate broke the record for the longest barefoot walk on his stint between Brisbane and Surfer’s Paradise, marking the occasion in history-making fashion.

“I wanted to do it in a way to get more momentum and raise more attention towards it, so I decided to walk 24 hours straight between Brisbane and Surfer’s Paradise,” he explains.

“It turned out to be a 27.5 hour walk, which had never been done before as well. So, I got two world records in one go!”

Anton says while he is proud of his incredible feat in raising awareness for men’s mental health and local not-for-profits Gotcha4Life and Tomorrow Man, the mammoth day-long stretch ‘pushed his mind and body as far as he could take it’.

“It broke me quite a bit, actually. I definitely had to recover for quite a long time from that. So, I was quite lucky that the roads after that were mostly just footpaths following the ocean,” he recalls.

“Being able to walk next to the ocean is just so much better for your mental health and your energy.”

But the barefoot wanderer is back on the unforgiving highway now, and as he battles the unceasing pain in his feet on his final 500km, he says he can’t help but dream of home in sunny Manly.

“My mind is very set on coming home now,” he admits.

“Of course, I’m still going to enjoy every day of this walk as much as I can and make the most of the time I have left to raise awareness, but it’s been more than four months now and I just have 33 days left.”

He estimates he will arrive in Manly on 17 October and has invited locals to join him on the home stretch.