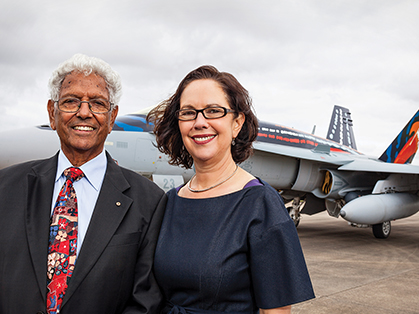 John Moriarty and Ros Moriarty unexpectedly embarked on their design journey in Melbourne in 1993, after the birth of their first son Tim.

Both wanted Tim to be connected with his Yanyuwa heritage, so they created turtle images which they screen-printed onto his bed linen when he was just a baby.

“We wanted to celebrate his belonging, both to contemporary Australia and to our family heritage in the Northern Territory,” Ros begins.

John was born in the late 1930s to a Yanyuwa mother and Irish father. His family lived in the Gulf of Carpentaria, in the Northern Territory, before John was taken from his home at the age of four as part of the Stolen Generation. It was not until 1968 that John was able to return, at age 30, to be reunited with his family and culture.

Ros and John started their art voyage in textiles in the 1990s, immersing themselves in art for three years and creating their brand, Balarinji.

Shortly after, Ros and John then moved to Adelaide where they had their son James and daughter Julia.

“We were based in Adelaide driving up and down to the Gulf, getting inspired [by] culture, colour, all the things that we were using to reflect design.” Ros says.

“We wanted to create a new way of thinking about Australian design.”

They relocated to Sydney in 1997 and moved in to working on major design projects for some of Australia’s best-known companies including Qantas, Nespresso, Microsoft, Transport for NSW and the Australian Paralympic Committee.

“We were working in lots of different areas to try and express the philosophy design that we wanted to present to Australia,” Ros continues.

They have launched five aircrafts with different designs for Qantas, with the first one being in 1994 and the most recent one was in 2018.

The Moriarty family has now been living in Sydney for the past 24 years, and a large part of their work is now infrastructure. They currently have a design studio in Crows Nest with a team of artists and designers.

“The thing I’m proudest of is the opportunities Balarinji creates, with our partners and clients, to give voice to Australia’s rich Aboriginal narrative to challenge us all about Australian design,” Ros says.

“Whether our brilliant team is illuminating the work of a globally significant Aboriginal artist on the latest Qantas airliner; deeply embedding local Aboriginal story in major public infrastructure; or inspiring the dreams of young creative professionals who work with us in the city, the country or the bush.”

John says it was an honour to receive such a prestigious prize.

“We are immensely honoured. We could never have imagined when we started out nearly 40 years ago, that our desire to celebrate our children’s belonging to my Yanyuwa people as well as to mainstream contemporary Australia, would grow to resonate so strongly as a contribution to our nation’s design identity,” he says.

Balerinji has no plans in slowing down.

Moving mountains for local wildlife
It’s not every day that six 19 to 20-year-olds decide to take it upon themselves to trek...
Celebrating an icon: 90 years of the Sydney Harbour Bridge
The Sydney Harbour Bridge captured the imagination of Australians as a symbol of modernity...
The slope to glory
What’s evident upon sitting down to chat with three-time Winter Olympian Sami Kennedy-Sim...
Local literacy icon
Manly’s multi-award-winning author, Belinda Murrell, is striving to create a positive...
Manly by tram
Although travel to Manly is indelibly associated with the ferry, in the period from 1911 to...