Making a difference through passing it on 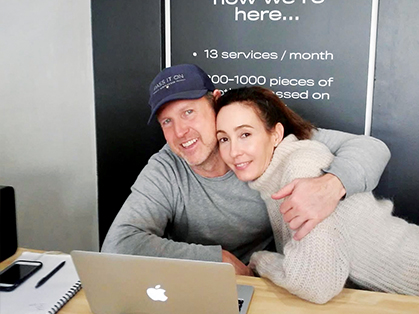 Together with his partner Olga and a small but dedicated team, Lavender Bay local Chris Vagg is making a big difference in the homeless community through his Pass It On project.

The project was conceived when Olga urged Chris to conduct a cull of his wardrobe.

Unsatisfied with the existing methods available to part with the unneeded pieces in his wardrobe, Chris felt there had to be a better way to make use of used but perfectly wearable clothing.

“When I looked into where clothes end up after they’re put into a donation bin, I started to realise they would rarely, if ever, actually end up going to the people most in need of them,” he tells North Shore Living.

“A lot of these charity bins, the organisations don’t care about the quality of the clothing that’s donated. Some will just use the donated clothes to repurpose them into rags they can sell.”

This inspired Chris to establish Pass It On Clothing & Co – a social enterprise providing items of clothing to the homeless every Tuesday in the Sydney CBD and monthly in Arncliffe and Darlinghurst.

Through his research and his experiences in the early days of the organisation, Chris decided to move away from the traditional model of clothing donation bins situated in a carpark or a shopping centre.

“Because of some of these private-run, for-profit organisations, the public has developed a warped sense of what an acceptable donation looks like,” Chris explains.

“That’s why we moved away from the traditional model of donation bins in public areas.

“Now our donations come from our partner organisations. We made this change to ensure we are passing on clothes that are not necessarily designer brands, but clean and wearable.”

Chris has run Pass It On out of inner-city shop fronts for the past few years. The organisation has managed to match people in need with 175,000 pieces of clothing since its inception, but there is even more on the horizon.

“Providing our service is a very important aspect of trying to improve the lives of people who are homeless,” Chris says.

“Having access to clean clothes is essential. But as I’ve spent more time with these people, and listened to their stories, it’s become clear to me that it’s only one part of the process.

The next evolution of the project is currently in the works. Chris is working on a holistic approach towards homelessness, where he will take a small group and provide tools to help people get back on their feet and prevent them slipping through the cracks again.

“We’re working on an academy that will help our homeless friends with more than just being clothed,” Chris says.

“It will teach them skills like budgeting and help them find permanent housing, gain confidence and even land a job at the end.

“We’ve achieved a lot with Pass It On, but this is another big step and I’m really excited for it.”

Through contacts he made during his time working for National Rugby League (NRL), Chris’ organisation has been promoted by Fox Sports television presenters Yvonne Sampson and Greg ‘Brandy’ Alexander.

“‘Brandy’ and Yvonne – those guys have been great,” Chris says.

“It makes a big impression when the people on TV come up to you and just have a chat, just ask, ‘How are you going?’

“They obviously have large profiles and they’ve been awesome in helping to increase awareness about Pass It On, and the work that we do.”

Moving mountains for local wildlife
It’s not every day that six 19 to 20-year-olds decide to take it upon themselves to trek...
The slope to glory
What’s evident upon sitting down to chat with three-time Winter Olympian Sami Kennedy-Sim...
Local literacy icon
Manly’s multi-award-winning author, Belinda Murrell, is striving to create a positive...
‘A tangible impact’
North Shore Living caught up with local tech entrepreneur, mentor, taekwondo instructor,...
Celebrating an icon: 90 years of the Sydney Harbour Bridge
The Sydney Harbour Bridge captured the imagination of Australians as a symbol of modernity...