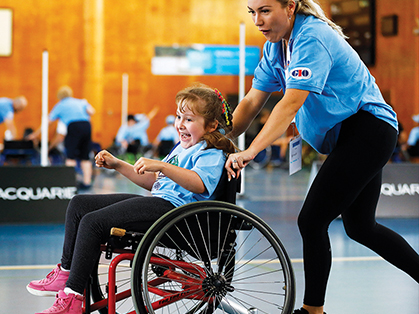 Although Wheelchair Sport NSW/ACT CEO, Mick Garnett, was recently awarded Administrator of the Year for his valued work, the Beaches local has only scratched the surface on the progress he plans to make.

After spending the beginning of his professional career working for big corporates, including Coca Cola, 10 years ago Mick shifted his focus.

He became CEO of Variety Australia, a children’s charity, and has spent the past three years as CEO of Wheelchair Sports NSW/ACT.

The 46-year-old Manly local has made great strides in the past three years, tripling the amount of people participating in wheelchair sport, and growing female participation all round.

“I really did see with Wheelchair Sports NSW/ACT an opportunity. I think we are on the edge of a real zeitgeist in disability sport or adaptive sport,” Mick says.

“We have a 10-year runway now to an Australian Paralympic Games in Brisbane, so the conditions are right for what we are doing in wheelchair sport right now.”

Mick launched in 2020 a campaign called ‘HOW I ROLL’ to help grow female participation in sport.

Working with ARIA Award winner Casey Donovan, he wrote a song to create a new anthem for girls and women in wheelchair sport.

“We produced a music video featuring the wonderful girls and women from our community, and, as a result of that, we’ve increased the percentage of female athletes in our membership from 29 per cent to 36 per cent.”

“I can’t tell you how many people that have joined now in the last three years (as we tripled participation) who simply said to us, ‘I didn’t know you existed’,” Mick says.

Mick says their research suggests that although the organisation currently has 1,200 members, only one in 29 people in NSW and ACT who are manual wheelchair users are currently participating in their sports.

“So, whilst we have had a lot of success over the last three years, we still see ourselves at the bottom of the mountain,” Mick says.

“That's the number we want to change. We want to make sure that everyone has the opportunity at least to change their lives through sport with us.”

Being awarded Administrator of the Year, Mick says, is a great recognition that the organisation is on the right track, but so much more work needs to be done until everyone that could participate in wheelchair sports knows about the opportunity.

He says for a lot of people, finding out that there are more opportunities than originally thought can change, and sometimes save, their life.

“We had a parent write to is after the [junior wheelies] camp in 2020. She said, my daughter is nine and partway through the year she sat us down as her mum and dad and said, ‘I think it’s probably better I’m not around anymore because I’m too big a burden and perhaps its better I’m not around’.

“So, the parents scrambled to find something for her to participate in, somewhere for her to belong.”

Mick says after she attended the junior wheelies camp, the little girl ‘found her tribe and she’s found her meaning’.

“Her mother said, ‘Thank you for giving us our little girl back’.”

If you want to be involved in a wheelchair sport, visit wsnsw.org.au.

‘A tangible impact’
North Shore Living caught up with local tech entrepreneur, mentor, taekwondo instructor,...
Keeping angels on earth
Bayview’s Samantha Hollier-James is a charity powerhouse, founder, community leader and...
Manly by tram
Although travel to Manly is indelibly associated with the ferry, in the period from 1911 to...
The row of a lifetime
Louis Hugh-Jones and three of his North Shore friends turned a crazy pub idea into a...
Moving mountains for local wildlife
It’s not every day that six 19 to 20-year-olds decide to take it upon themselves to trek...