Powering through for mental health 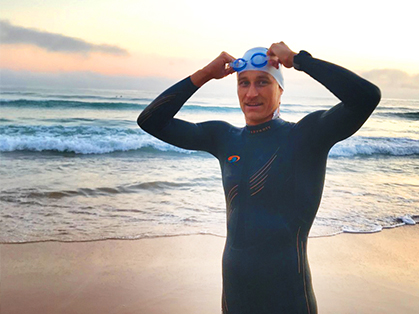 Manly Life Saving Club’s Lachie Bruce pushed his body and mind to the limit recently to swim 30-kilometre from Palm Beach to Manly, raising awareness and funds for mental health.

Local Lachie Bruce is open about how mental health has afflicted himself, his friends, and his family.

The physiotherapist says after thinking about what he could do to make a difference, he decided to complete a remarkable swim from one end of the Peninsula to the other.

“I noticed myself kind of going down a bad route as well and all of these thing’s kind of hit me at once.”

After, sadly, losing his grandmother at the beginning of the year, a previous conversation they had resonated with Lachie about having ‘one shot at life’.

“I kind of said ‘I’ve always wanted to do something crazy’.”

Lachie has previously thought about swimming from Palm Beach to Manly, having tackled the stretch by paddling, but had yet to take on the challenge. That was until 23 October this year.

“I just went ‘you know what, lets raise some money and let’s raise some awareness,’” he says.

“Swimming has always come natural to me because that’s the sport that I was thrown into when I was younger. So, it was nice to start training and fall back in love with the water.”

Lachie says choosing to train himself for the tremendous swim was ‘pretty intense’, working around his full-time job and coaching the Nippers down at Manly’s Life Saving Club.

When looking back on it now, he admits the preparation was ‘pretty crazy’.

Then, the day of the swim arrived. Lachie says he felt fine until the 17km mark, where he ‘hit a wall’.

He says the thoughts of his family and friends motivated him to push harder and find his inner strength.

“I had a few things come into my mind. Thinking about the family members that have gone through things. When I reached Curl Curl, I had a big group of people jump in the water with me, so it was really cool,” he recalls.

“We were all swimming to Manly and it was all the people I wanted to be surrounded by.”

Lachie completed the swim in an impressive 5 hours and 33 minutes and raised an incredible $21,000 for local mental health charity Gotcha4Life.

He says he is thrilled to have smashed his original fundraising target by more than double and hopes the funds go a long way to supporting, engaging, and empowering individuals to overcome suicide.

He says the idea for the swim was for him to open up and be honest – be honest with himself and with his friends and family about the journey they have all gone through.

“We all need to open up, there might be days where we have really stressful days and that’s okay, it’s a normal thing to go through,” Lachie says.

“A lot of us, particularly males, we won’t want to talk, we go along our merry way, we will suppress our symptoms, or suppress our feelings.

“We have just got to be vulnerable and let ourselves open up. It feels really taboo to talk about it. It feels scary, but as soon as you start talking about it, you start to realise that you’re okay.”

You can still support Lachie and donate to Gotcha4Life by visiting https://gotcha4life-fundraising.raisely.com/lachie-bruce/.

Match point
The last three years have been a rollercoaster ride for born and bred Northern Beaches...
Miss Harbord 1885
Most readers will know that the suburb and beach to the immediate north of Queenscliff has...
Football for all
John Tansley is the head of Active Opportunities, a program that helps children with...
Making a difference through passing it on
Together with his partner Olga and a small but dedicated team, Lavender Bay local Chris...
The Great Depression in North Sydney
In April 2020, the International Monetary Fund declared the worldwide ‘Great Lockdown’...