The row of a lifetime 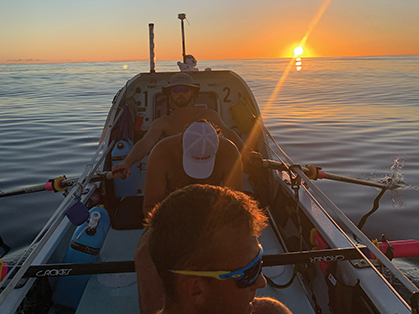 Louis Hugh-Jones and three of his North Shore friends turned a crazy pub idea into a reality, rowing across the Atlantic and raising almost $200,000 for charity along the way.

“I read a book about it [rowing the Atlantic], James Cracknell’s book, he’s an ex-rower and he did it and I thought ‘God, I’d never do that in my life’,” Louis laughs.

Fast forward a few years and Louis and his friends bring up the idea while at the pub. Instead of just talking about it, like most people do over a pint, they made it a reality. Louis became friends with his fellow rowers through connections at Mosman Prep School, which he attended when he was younger.

Louis, now 25, tells North Shore Living that the mates would train for the mammoth journey by rowing from Mosman to Palm Beach and back.

“It’s less of a physical challenge than one might think and more of a mental, emotional challenge,” Louis says.

“The mind is probably the one that quits first before the body.”

Louis and his three friends, Sam, James, and Rob spent 37 days, rowing 5,000 kilometres, 24 hours a day across the Atlantic Ocean, from San Sebastian in the Canary Islands, Spain to Antigua and Barbuda in the Caribbean.

Throughout the journey, the rowers would never get more than two hours rest at any one time.

“More like an hour and a half, because you had to get changed and wash yourself and eat food, all in that two-hour break,” Louis explains.

“Some of the boys averaged about four or five hours sleep a day and then I would pretty much nap every off shift.”

Louis says some of their highest and most memorable moments of the journey were the sunsets and enjoying their time together appreciating their surroundings.

“You feel like you’ve just accomplished a day, so we would always play some good music and get everyone on deck and maybe share a story that someone had sent to us,” he says.

“But otherwise, we had some wonderful wildlife to keep us company.”

After over a month with only each other and the big blue to look at, the team finally completed the journey and made it back to land on 18 January 2022.

“It was overwhelming because you haven’t seen anyone at all, then all of a sudden, you just sort of come across land,” Louis recalls.

“All of a sudden you turn a corner and there’s your family, friends, girlfriends, all jumping and screaming and going nuts, and then you realise you’ve sort of done it.”

Louis experienced a serious case of sea legs, unable to walk or stand up when he finally left the boat as he hasn’t used his muscles in his legs for over a month.

“It was a group decision, we had our own reasons for supporting mental health so choosing a mental health charity was actually quite easy between the four of us,” Louis says.

A financial advisor by day, Louis says he would love to do a physical challenge again in the future.

“Maybe not ocean related,” he laughs.

Keeping angels on earth
Bayview’s Samantha Hollier-James is a charity powerhouse, founder, community leader and...
‘A tangible impact’
North Shore Living caught up with local tech entrepreneur, mentor, taekwondo instructor,...
Moving mountains for local wildlife
It’s not every day that six 19 to 20-year-olds decide to take it upon themselves to trek...
Celebrating an icon: 90 years of the Sydney Harbour Bridge
The Sydney Harbour Bridge captured the imagination of Australians as a symbol of modernity...
Local literacy icon
Manly’s multi-award-winning author, Belinda Murrell, is striving to create a positive...