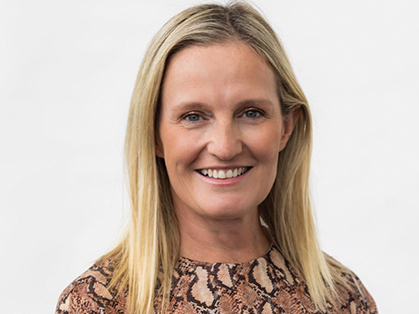 Simone Short has was recently awarded the prestigious title of the North Shore’s Adult Volunteer of the Year in 2021 for her work with local charity The Gidget Foundation.

Not only has Simone been involved with Gidget Foundation Australia since its inception in 2001, but she has also held several voluntary roles with the foundation over the past 20 years. These include board director, committee member, event manager, and currently volunteer manager.

Originally from Terry Hills and coming from a close-knit family, Simone now lives in Mosman with her husband and four teenage children.

The Gidget Foundation was launched after Simone’s sister, Louise, tragically took her own life when suffering silently from post-natal depression and anxiety (PNDA).

Louise was known as ‘Gidget’ to her friends, and after learning the devastating impacts of post-natal depression and anxiety, Simone wanted to make a difference and help other women.

“My sister’s close friends invited my other sister, Jacqui, and I to do something to get people talking in order to stop other women suffering in silence, as Gidget had done,” Simone tells North Shore Living.

The Gidget Foundation is a not-for-profit organisation which helps raise awareness of perinatal and post-natal depression and anxiety, and provides support for those in need.

Simone says starting the conversation among the circle of friends was the first step to helping others who may have been suffering.

“PNDA wasn’t something anyone spoke about 20 years ago. I’m very proud of what we have been able to achieve from those initial conversations,” Simone says.

The Gidget Foundation has gone on to help many women, and Simone says it ‘feels good’ to see what has been achieved in her sister’s memory.

She also says it’s great to see how it is valued within the community.

The foundation often hosts events to raise funds to support their programs, with their first event 20 years ago being attended by 200 supporters.

“It’s incredible when you give people the opportunity to come together to support your cause how willing they are to stand by your side if it is something they believe in too,” Simone says.

She says being a new parent now is tougher than ever before, with the pandemic meaning that parents don’t have their usual support networks and connections.

“As we learnt the first step to getting help is to start talking and that has become our core message.”

Being awarded for the journey she has taken to help many women was a ‘lovely recognition, Simone says.

“I was delighted to accept the award on behalf of my sister, Gidget, and all the amazing volunteers who are always there, willing to help.”

She says volunteers are the backbone of the Gidget Foundation, and their generosity has enabled them to make a difference.

“I enjoy recruiting and working with new volunteers because everyone has a story and a reason behind why they choose to volunteer for us,” Simone says.

If you would like to know more about how Gidget Foundation Australia can offer support, or are interested in volunteering, visit gidgetfoundation.org.au.

Moving mountains for local wildlife
It’s not every day that six 19 to 20-year-olds decide to take it upon themselves to trek...
The slope to glory
What’s evident upon sitting down to chat with three-time Winter Olympian Sami Kennedy-Sim...
Local literacy icon
Manly’s multi-award-winning author, Belinda Murrell, is striving to create a positive...
‘A tangible impact’
North Shore Living caught up with local tech entrepreneur, mentor, taekwondo instructor,...
Celebrating an icon: 90 years of the Sydney Harbour Bridge
The Sydney Harbour Bridge captured the imagination of Australians as a symbol of modernity...