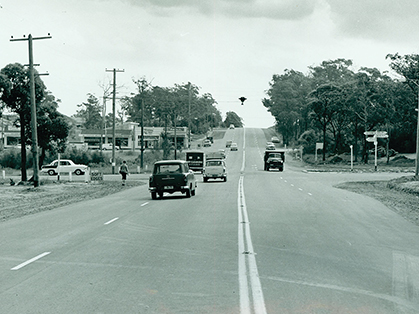 With the growth in prosperity after the Second World War, ownership of motor vehicles increased rapidly and so did accidents on the roads.

Road signs became more necessary, and the Australian Standards Association formed a road sign committee to research needs and effectiveness, and to coordinate the approach nationally.

In 1952 the committee requested that the NSW Transport Department set up an experimental beacon at an appropriate intersection. The beacon was to be suspended over a crossroad and to flash in all four directions once every second. The request actually came from the Victorian representatives, so it is not clear why the beacon was placed in New South Wales.

The intersection chosen was that of Roseville Road (today’s Warringah Road) and Wakehurst Parkway, and in October 1952 the ‘Blinking Light’ was born. Before installation, technicians monitored vehicle speeds both on approach and on entering the intersection and they repeated the checks afterwards.

Unfortunately, the results were never released to the public but perhaps they were somewhat disappointing as the concept did not sweep Australia. Traffic police continued to manually control most busy intersections for quite a few more years, before the installation of the now familiar red/amber/green traffic lights.

However, the Standards Association road sign committee remained active. Readers may be interested to learn that the ubiquitous black and yellow signs with the pair of truncated legs – that draw attention to pedestrian crossings – also emerged in 1952. As was reported in the press at the time, “The symbolic legs, studded with reflector buttons, resemble a similar sign seen in Ceylon by the chairman of the committee, Professor AP Elkin, who is professor of anthropology at Sydney University.”

Match point
The last three years have been a rollercoaster ride for born and bred Northern Beaches...
The Great Depression in North Sydney
In April 2020, the International Monetary Fund declared the worldwide ‘Great Lockdown’...
Football for all
John Tansley is the head of Active Opportunities, a program that helps children with...
Making a difference through passing it on
Together with his partner Olga and a small but dedicated team, Lavender Bay local Chris...
Youth environmental group sea-ing change
Eighteen-year-old year 12 student Stephanie Evans from Narraweena is the face of Seas of...