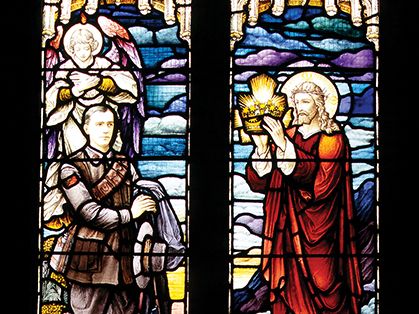 Christianity was the dominant religion in Australia for more than two centuries. From the second half of the 19th century, churches mushroomed across New South Wales.

In the ever-expanding Sydney of the mid-to-late 1800s, populations grew so that the £500 to £1000 necessary to construct a stone and/or brick place of worship was gathered by subscription. Spires were sometimes planned but not realised – the cost of that last embellishment being just too much for a parish to bear.

Gothic was overwhelmingly the preferred design for Sydney’s churches from the 1860s. Those buildings displayed the features we most commonly associate with traditional churches: spires, pinnacles and pointed lancet windows with coloured glass. The shift to Gothic was a colonial response to the emerging fashion in England, where the influential architect Augustus Welby Pugin was designing church and civic buildings in the medieval mode.

Many Gothic churches survive throughout the lower North Shore, spared the wrecking ball because of their divine purpose. Typically, those erected before 1900 were built of stone and those in the 20th century with brick. The ceilings of both are frequently beautiful timber constructions of buttressing, beams, and planks. Stained glass windows typically denote denomination. Those featuring Jesus, Mary and the pantheon of saints were favoured by Catholics and some Anglicans. Patterns or floral motifs were common in churches built for Methodists, Congregationalists, and Baptists.

Regardless of one’s beliefs, churches built in the heyday of the Gothic are worth a visit during service times or by appointment, where possible. St Thomas’ Church in North Sydney is a particularly beautiful example of the Academic Gothic style designed, as it was, by one of Sydney’s foremost church architects, Edmund Blacket in the early 1880s. Unlike Blacket’s other design, St Stephen’s at Willoughby, the interior of St Thomas’ has not been modernised. Look up with wonder at the ceiling. Christ Church at Lavender Bay has glorious windows made in a pre-Raphaelite style in the 1880s. St Augustine’s in Neutral Bay, built of brick in the 1920s, has an astonishing memorial window donated by a grieving mother to commemorate her dead soldier son. The 1912 pipe organ at St John’s Uniting Church, Cremorne, is well worth a look and a listen.

Making a difference through passing it on
Together with his partner Olga and a small but dedicated team, Lavender Bay local Chris...
Youth environmental group sea-ing change
Eighteen-year-old year 12 student Stephanie Evans from Narraweena is the face of Seas of...
Swinging into an inclusive community
Inspired by her son, Marcus, Caroline Ghatt took charge in solving childhood exclusion and...
It's like a zoo in the backyard
Animal lover, Lynette Millet from Bilgola Plateau, has volunteered with WIRES for over 26...
Miss Harbord 1885
Most readers will know that the suburb and beach to the immediate north of Queenscliff has...