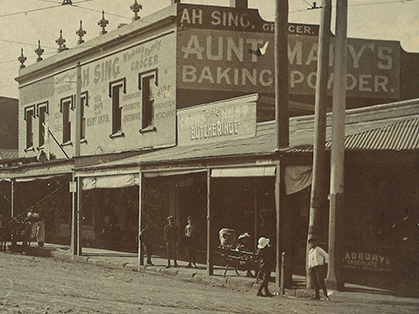 The Chinese communities that live today on Sydney’s lower North Shore are vibrant and confident.

These communities walk in the footsteps of others who lived and worked in the area in less welcoming times - the decades leading up to and following the introduction of the so-called White Australia Policy of 1901, which aimed to restrict the entry of Asians and people of colour.

From the 1870s to the 1930s hundreds of men and some women cultivated market gardens from Mosman to Cammeray and up to Willoughby. Many of these people forged links with each other or arrived in Sydney with established networks that related to villages and families in China.

Some had come to Australia in search of gold between the 1850s and 1870s and stayed on to pursue livelihoods as gardeners, shopkeepers, and furniture makers among other occupations.

Chen Ah Teak was one who was recognised as a community leader. The land he leased at Mosman gave rise to the name Chinaman’s Beach. Ah Teak lived in present-day North Sydney for a time and employed men to cultivate around 12 hectares of market gardens on present-day Eastern Valley Way.

Ah Sing established himself as a storekeeper in St Leonards - present-day North Sydney – in 1879. He was married to one of the few Chinese women in the colony, Ah Lee. When their first child was born in 1886, they named him Willoughby after the area. Sing opened a thriving grocery business on Willoughby Road in Crows Nest in the early 1900s.

Crows Nest was a centre of Chinese retailing in the three decades to 1930. Sing was joined by others including Arthur Kong who had previously leased a shop on Lane Cove Road – the present Pacific Highway.

Arthur had arrived as a 10-year-old boy in 1878 and was known as Ah Kong. He worked as a gardener for more than a decade before setting up his retail business. From Lane Cove Road he moved to Willoughby Road and then to Military Road, Neutral Bay, around 1911 where several other Chinese men were selling fruit and vegetables.

Arthur Kong’s story is remarkable but not exceptional. He returned to China twice, once to marry and the second time just to visit his wife. There is no evidence that Arthur brought his wife back to Australia. In all likelihood, he was not allowed to do so.

Moving mountains for local wildlife
It’s not every day that six 19 to 20-year-olds decide to take it upon themselves to trek...
The slope to glory
What’s evident upon sitting down to chat with three-time Winter Olympian Sami Kennedy-Sim...
Celebrating an icon: 90 years of the Sydney Harbour Bridge
The Sydney Harbour Bridge captured the imagination of Australians as a symbol of modernity...
Local literacy icon
Manly’s multi-award-winning author, Belinda Murrell, is striving to create a positive...
‘A tangible impact’
North Shore Living caught up with local tech entrepreneur, mentor, taekwondo instructor,...