The women behind Hegarty's Ferries 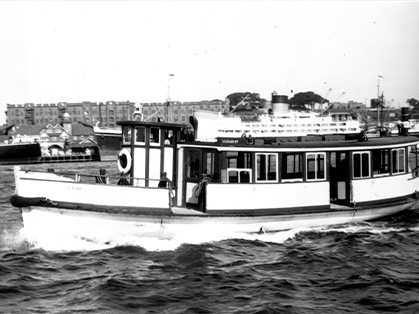 The 1950s was a tumultuous decade for Sydney’s mass transport.

In 1958, the city’s tram system, then the largest in the southern hemisphere, was dismantled to make way for cars and buses. And earlier, in 1951, the 50-year-old Sydney Ferries Limited was taken over by the State Government because it was no longer profitable.

The combination of car ownership and the Sydney Harbour Bridge had killed the inner harbour ferry business. Well almost.

The firm of Norman Hegarty and Son had operated the McMahons Point, Lavender Bay, Milsons Point and Circular Quay run since 1932, when Sydney Ferries relinquished that service in the wake of the Bridge’s opening.

Hegarty built and operated his small ferries until 1949 when he sold out to two remarkable women, Maud Barber and her foster daughter Jean Porter.

Maud and Jean had a partner Arthur Barber - husband of Maud and boat designer. He had gone bankrupt in the difficult times of the 1930s and was only too happy, it seems, to assist Maud in her enterprise.

It was her company. Arthur trained Jean in naval architecture, so that she worked the technical side of operations.

Two women running a ferry service with 36 employees would be newsworthy today. It was completely novel in the 1950s, the heyday of idealised motherhood and devoted housewives.

Accordingly, the pioneering feminist journalist Margaret Clarke wrote a feature on Maud and Jean (Sunday Herald, 1 April, 1951). In that Maud Barber responded optimistically to the challenge of making a small ferry firm pay in the age of the automobile.

A small fleet and a small route which serviced popular Luna Park were advantages rather than liabilities. ‘I’ve got a really nice little business. It’s a gold mine’, she claimed.

‘… I knew I could make a go of it at sixpence a trip… It takes a woman’. ‘I reckon she’s done a great job’, added one of the all-male staff.

Maud and Jean made a go of it for more than a decade. When the business was sold in 1960, it was Maud’s bad health rather than operating figures that forced the issue. She died in 1964.

Maud, Jean and Arthur had maintained a fleet of five ferries in difficult times for the subsequent owner JC Needham. Consequently, the tiny ferries with the blue and white livery and high proud bows became an endearing and enduring part of the memory of many who lived around and visited Lavender Bay and Kirribilli in the second half of the 20th century.

They had a particular impact upon artist Peter Kingston whose artworks often included a Hegarty’s ferry as an element of the vibrant and emotive harbour he wistfully evoked.

It was the closure of Luna Park in 1979, after the disastrous Ghost Train fire, which really undermined the viability of Hegarty’s ferries.

Captain Cook Cruises bought the business from Stannards in 1987 and ran it as a sideline from their wharf at the Quay but the end came in 2003 when they lost exclusive use of that facility. An attempt to fund the business as a boutique heritage service failed – with Luna Park still closed there were simply not enough passengers.

MV Emerald Star, built in 1943 still plies the harbour as a charter vessel - testament to Maud, Jean and the others who ran Sydney’s little ferries.

Art with heart
A local artist has become a three-time finalist of the Archibald Prize with a portrait of...
Get your spot
Mona Vale Surf Life Saving Club is on the lookout for sponsors to have their name featured...
Clean up crusader
For over half a decade, Terrey Hills local Kobie Joyce has dedicated at least one Sunday a...
Lifesavers honoured
Lifesavers from across the Peninsula were recognised for their outstanding achievements and...
Beyond breaking point
When Peninsula Living checks on the progress of the ‘Barefoot Dutchman’ Anton...