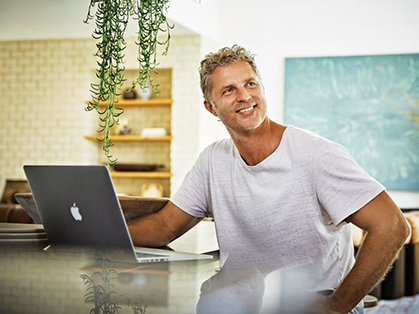 When we catch up with Jason Sullivan, he’s in Byron Bay working on Shelley Craft’s new home.

The world-renowned interior and landscape designer – who calls Manly home – has no shortage of celebrity clients in his growing portfolio. Think Cameron Diaz and Sam Worthington, but we’ll come back to that.

It’s not at all surprising, when you consider Jason’s an A-lister in his own right.

Fresh out of school, he was signed by Chadwick Models – and was in his early 20s when he was getting his makeup done in the chair next to Naomi Campbell for a London show hosted by Stella McCartney.

The globetrotting then began – Paris, Milan, New York – and he was right in the thick of what he calls the “supermodel era”.

“Once you’re in that industry, you quickly realise that everyone’s the same, but it’s really exciting at first,” he says.

“I was working for Valentino and Armani, doing these shows for these really big clients in my early 20s.

“There were Puff Daddy parties, Kate Moss, Claudia Schiffer, it was a really wild time to be a part of all that.”

He took a step back from the glitz and glamour of the catwalks to come home to Manly, spend time with his family and focus on his second love – design.

In 2008, working with a design firm three days a week as an assistant, Jason felt he was floundering. Then, by chance, his flat-mate at the time noticed a ‘designers needed’ advertisement for a reality show called HomeMade.

“He gave me the number, it sounded a bit Big Brother but I auditioned anyway and then basically forgot about it,” he recalls.

“I was holidaying in Mexico with all my friends over New Years Eve and didn’t listen to my phone for a few days.

“I’d missed calls from my agent, and when I got onto him, he’s like, ‘They’re desperate for you for the show. You’re the character they need’, and they apparently kicked someone out to put me in.

“So next thing I was flying back and within a day I was in this house doing this reality show. It was such a whirlwind, and then I had to design eight houses in eight weeks.”

He laughs recalling how he was portrayed as the “ditsy, spiritual model” on the show, but there was no denying his ability, as he beat another well-known designer Darren Palmer in the final despite being the most inexperienced contestant.

“Each week you got the new house you just wanted to throw up, because you’d had about two hours sleep and you had to do the entire house from Monday to Friday,” he reveals.

“I turned up to filming quite buff and I was just a rake by the end, but the hard work certainly paid off, as it helped launch my design career.”

In the months after the show, Jason appeared on A Current Affair having helped renovate a house for orphans who’d lost both parents in the same week to cancer – an emotional experience having just lost his own father to cancer.

Then fast forward through a guest judge and mentor spot on The Block the following year, and Jason is back in the US, after an agency shows interest in a television show he’s pitched.

Notching the kilometres on a treadmill at West Hollywood’s Equinox gym, none other than Cameron Diaz steps on the machine to his right.

They knew each other from his previous life as a runway model and when he told her he was designing homes, she told him she had a new place that needed a facelift.

They arranged to meet up at The Standard in New York the following week, and after several bottles of wine, Cameron invited Jason to design both her New York and LA pads.

She was shooting The Other Woman, and Jason ended up spending that night in the Boom Boom Room partying with the cast, including Kate Upton and Leslie Mann.

He has since designed the interior of Sam and Lara Worthington’s LA mansion, and a string of other properties of the wealthy and influential both in Sydney and abroad.

Jason, who’s been working in collaboration with CPlusC Architectural Workshop, has been shortlisted for the World Architecture Festival Awards two years running.

But he believes an upcoming Manly project, which he and CPlusC were awarded the same week he spoke with Peninsula Living, will be his piste de resistance.

“We’re aiming to build Australia’s most eco-friendly house in history,” he says excitedly.

“I’m a huge believer in sustainability, so I feel like my career has been leading up to this moment.”

But first he has to finish Shelley’s home, and catch up with Nicole Kidman, who, as I’m sure you’d guess by now, is a long-time friend of Jason’s. He even went to her wedding, where he met Keith Urban for the first time.

Art with heart
A local artist has become a three-time finalist of the Archibald Prize with a portrait of...
Get your spot
Mona Vale Surf Life Saving Club is on the lookout for sponsors to have their name featured...
Clean up crusader
For over half a decade, Terrey Hills local Kobie Joyce has dedicated at least one Sunday a...
Lifesavers honoured
Lifesavers from across the Peninsula were recognised for their outstanding achievements and...
Protecting our pine-lined promenade
A military move to cut down the Manly beachfront pine trees during World War Two was...