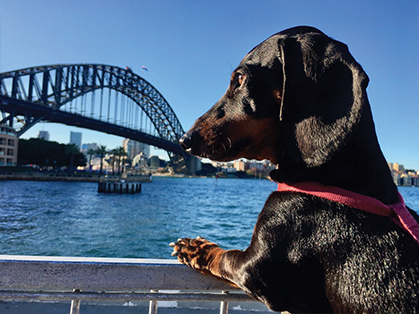 A Mosman councillor is calling on the NSW Government to remove a ban on dogs being able to ride on ferries, after a new rule came into effect on 1 June.

Councillor Simon Menzies says the petition was open for a period of 12 weeks during the recent COVID-19 lockdown and received almost 5,000 signatures from locals protesting the ban.

“I was thrilled with the response, there’s obviously a lot of people who feel like dogs should be allowed on ferries,” Councillor Menzies says.

Councillor Menzies says he had various events planned to assist the petition, including a planned protest at a local wharf of 100 dogs and their owners, which were cancelled due to the lockdown.

He states if these events were to go ahead, he believes that the petition would have seen an even higher response rate than it already received.

“We plan to do a follow up once we are out of lockdown and there will be a public meeting held as proposed down at Reid Park at Mosman bay in time. There are a lot of people who want to take their dogs out and show the government that we need to move forward and make Sydney more dog friendly,” Councillor Menzies says.

“I understand the process will be that when the State Government resumes, the petition will be tabled and then I’ll receive a written response along with the other near on 5,000 people as to what is being determined as a result of the petition.”

Councillor Menzies says he is hopeful that ‘unreasonable’ rule will be overturned. He has also told the community to expect to see more being done on this matter once out of lockdown.

The row of a lifetime
Louis Hugh-Jones and three of his North Shore friends turned a crazy pub idea into a...
Moving mountains for local wildlife
It’s not every day that six 19 to 20-year-olds decide to take it upon themselves to trek...
Celebrating an icon: 90 years of the Sydney Harbour Bridge
The Sydney Harbour Bridge captured the imagination of Australians as a symbol of modernity...
The slope to glory
What’s evident upon sitting down to chat with three-time Winter Olympian Sami Kennedy-Sim...
Local literacy icon
Manly’s multi-award-winning author, Belinda Murrell, is striving to create a positive...