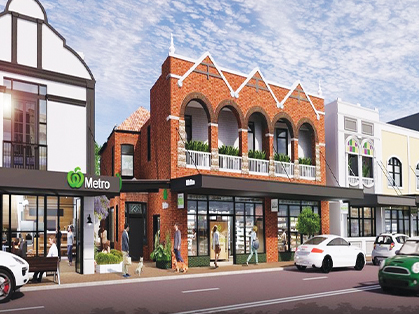 The recent Woolworths Metro approval has caused a huge uproar from concerned locals in protest.

After an almost two-year build up and battle against the new neighbourhood store, residents are not happy with the outcome.

Many residents and Mosman Council battled to keep the store from entering Military Road, Mosman, before eventually failing when the Land and Environmental Court deemed the development suitable for approval.

The court gave it’s support of the $5.3 million plan, on the conditions set out displayed on the final drawing plans on 2 November.

John Wakefield, convenor of the more than 1,000-strong Mosman Village Community Group, said the main concerns from residents were relating to vibrancy of the area, traffic and parking.

Speaking with North Shore Living he said he is pleased that the group helped stop the original proposal for a supermarket sized Woolworths.

“We were disappointed of course, but we're pleased that we are constrained with a Metro and not their first proposal,” he said.

“We are disappointed that the issues that the community expressed in particular, in regard to parking and in regard to traffic were dismissed by the courts.

Mr Wakefield explained that the approval is conditional, and the Mosman Village Community Group will be following it closely.

“We [the group] will also be lobbying council to ensure that the negative impact of the development is minimised,” he said.

In a statement, Andrew Loveday, Woolworths Group general manager of property development, said the supermarket giant was ‘delighted’ by the court’s ruling.

“We look forward to delivering local residents a vibrant and convenient shopping experience that is sensitive to the unique feel of Mosman,” he said.

Woolworths is currently preparing a response for the Council, following the conditions of approval outlined in the court’s decision.

The row of a lifetime
Louis Hugh-Jones and three of his North Shore friends turned a crazy pub idea into a...
Moving mountains for local wildlife
It’s not every day that six 19 to 20-year-olds decide to take it upon themselves to trek...
Celebrating an icon: 90 years of the Sydney Harbour Bridge
The Sydney Harbour Bridge captured the imagination of Australians as a symbol of modernity...
The slope to glory
What’s evident upon sitting down to chat with three-time Winter Olympian Sami Kennedy-Sim...
Local literacy icon
Manly’s multi-award-winning author, Belinda Murrell, is striving to create a positive...