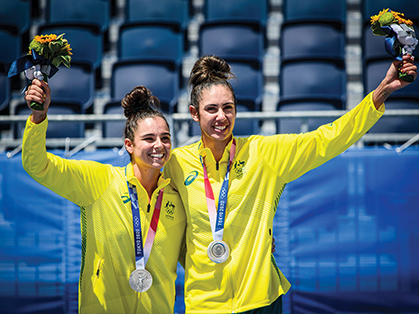 Peninsula Living shines a light on the achievements of our local athletes at the Tokyo Olympics.

Hands up if you're still suffering Olympic Games withdrawals?

The good news is you only have to wait another three years for the next instalment – Paris 2024.

Northern beaches athletes are already eyeing another shot at the world's greatest show, planning to build on last month's achievements.

Here's how the Games panned out for our local competitors:

Mariafe Artacho del Solar left Australia as an unknown and returned a front page hero with a silver medal around her neck.

The one-time Elanora Heights resident, and our January 2020 cover star, learned her trade as 11-year-old playing on the Manly Beach courts.

Mariafe and teammate Taliqua Clancy reached the final against Americans April Ross and Alix Klineman, after earlier knocking out the world champion Canadians in the quarter finals.

Our girls went down in straight sets but picked up Australia's first beach volleyball medal since Kerri Pottharst and Natalie Cook combined to win gold at Sydney 2000.

Mariafe arrived in Australian from Peru, overcoming language barriers, home sickness and selection politics to rise to the top.

She hopes the silver medal inspires those who follow.

"It means a huge amount. We want to get our sport back on the international stage. In Australia we want to inspire the next generation," Mariafe said.

"This is where my dream started by watching them (Cook and Pottharst)."

Our women's team headed to Tokyo with designs on defending the title won at Rio 2016.

But after cruising through its opening two games, Australia lost 14-12 to the US in its final pool game.

It proved a costly defeat, with the Aussies pitchforked into a quarter-final against a red-hot Fiji.

It was close but the Fijians, who ended up with the bronze medal, got the money by two points and our campaign was over.

Manly Marlins fullback John Turner and Collaroy's Nick Malouf were members of the men's squad that finished a disappointing seventh.

"I’m super disappointed in how our team performed and truly gutted we didn’t have a podium finish," John told Peninsula Living.

"Sevens is a cruel game and little mistakes can change a game. We had too many of those."

Brandon Starc's performance in the high jump final will go down as one of the great moments of the Games.

With his brother Mitchell and the rest of the Australian cricket team watching on from their training base in Bangladesh, Brandon cleared 2.35m to finish fifth.

The Collaroy Plateau resident had a shot at 2.37m and 2.39m in an attempt to get amongst the medals, but missed both attempts.

Mutaz Barshim and Gianmarco Tamberi shared the goal after both cleared 2.37m.

Brandon walked away without a medal despite recording the best jump by an Australian in Olympic history.

Elanora Heights sprinter, and our April 2018 cover star, Anneliese Rubie-Renshaw anchored the women's 4 x 400m relay team, but Australia was unable to get past the first round.

The Beaches was well represented, with four players making their way to Tokyo for the sport's first appearance at the Games since 2008.

Kaia Parnaby, Rachel Luck, Michelle Cox and Tarni Stepto made their way onto the diamond for the Spirit, but were unable to secure passage out of the pool stages.

Australia beat Italy but were defeated by Japan, Canada, the US and Mexico.

It was a great learning experience for the Aussies against quality international competition.

As if competing at an Olympic Games in the middle of a global pandemic wasn't hard enough, Collaroy triathlete Emma Jeffcoat had to contend with a typhoon.

Wet and wild conditions greeted competitors for the swim leg and bike crashes were commonplace as the roads turned into a tarred slip and slide.

Emma fought on valiantly, placing 26th and helping Australia to ninth in the team event.

Bronte Halligan was just eight when she told her mum she'd one day go to an Olympic Games.

The dream was cruelly cut short when she narrowly missed selection for Rio 2016, but the Manly 24-year-old made up for lost time in Tokyo.

Bronte was one of Australia's leading lights in a campaign that ended at the quarter-final stage.

She scored the final goal in the 9-8 loss to the Russia – a defeat which knocked the Stingers out of medal contention.

The crew had to fight all the way to make the final and looked good at the 1000m mark, sitting second behind eventual winner Canada.

But things didn't go to plan from there.

The Australians were overpowered in the final stretch, finishing a disappointing fifth.

It's left Georgie and her crewmates with plenty of fire in the belly as they contemplate another campaign in three years' time.

Narrabeen paramedic Jo Brigden-Jones somehow found the time, energy and focus during a global pandemic to compete at these Games.

Her astonishing sacrifice was rewarded with a seventh placing as part of the women's K4 500m team.

She teamed with Jaime Roberts to finish 13th overall in the K2 500m.

It's the end of Jo’s Olympic journey, with three-time Olympian Murray Stewart also likely to follow her into retirement after the men's K4 500m placed sixth in an emotional farewell race.

Cousins Jason Waterhouse and Lisa Darmanin overcame battered and blistered hands – brought on by Tokyo's hot and humid conditions – to finish ninth in the Nacra 17 foiling.

Olympic debutant Carolyn Rayna-Buckle, of Balgowlah, was part of the ninth-placed Australian team.

Providing parents hope
After facing her own battle with postnatal depression, North Shore mum Alexandra Parker...
Lifesavers honoured
Lifesavers from across the Peninsula were recognised for their outstanding achievements and...
Freestyle through the frost
Peninsula Living finds out why the Dee Why Ice Picks is one club worth diving into...
Dedicated volunteer passes
The Mosman community is in mourning following the loss of tireless social campaigner,...
No slowing down
TV chef Fast Ed chats with North Shore Living’s Joe McDonough about life in lockdown and...