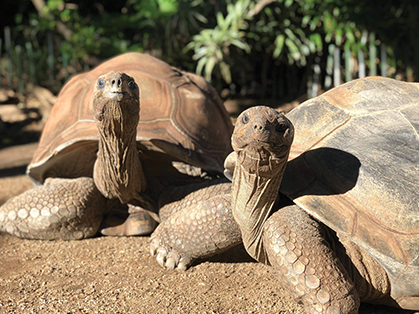 From a frisky giant tortoise, to an echidna with an appetite for escape, Taronga’s oldest residents really are characters!

North Shore Living spoke with a collection of keepers from Taronga about the oldest and most venerable animals in their care.

When did Esmerelda (Essy) and Lance arrive at the zoo?

Esmerelda came on 11 January 1947 on a ship called ‘The Mangarella’ from the Seychelles and was estimated to be 20-30-years-old on arrival.
Lance arrived on 3 March 1995 from Melbourne Zoo. He was sent there as a gift from the Mauritius government in 1975.

Describe their personalities… Have they changed as they’ve gotten older?

Lance is a 200kg grumpy old man that enjoys chasing me around the yard while I rake, and sitting on every single pile of leaves. He will push over the rubbish bin in his ‘rush’ to follow me, and stand on the hose while I’m trying to fill the pond.
Esmerelda is a bit more reserved but she is incredibly perceptive. Once she sees the big box of veggies, she’ll keep close just so she can get first dibs. She also has impeccable manners, taking small delicate bites of her food as opposed to Lance’s ‘watch how much I can stuff in my mouth’ chomps.

Do Lance and Essy get along?

They get along well throughout most of the year. However, at certain times, Lance’s libido pipes up a little and he attempts to mate with Essy (unfortunately though, I don’t think he’s her type).

What is the life expectancy of their species?

It’s believed giant tortoises can potentially live up to 150 years, so they may have quite a few birthdays yet!

When and where was Spitter born? And how did she get her name?

Spitter was born on 1 July 1960 at Taronga. She was one of the first chimp infants to be born at the zoo, and is now the oldest chimp living in a zoo in the southern hemisphere.

Describe her personality… Has she changed over the years?

Spitter has always been a very confident individual. These days she is very well respected by the group, but chooses to stay out of the politics when she can.
She remains very protective of her family and will step in and support her daughter and grandsons if she needs to. If other members in the group are upset or worried about something they will often go to Spitter for a hug.
When Kamili’s mother died a couple years ago, Kamili sought comfort from Spitter while she was grieving, spending a lot of time with her and getting hugs when she needed them.

How popular is Spitter with zoo staff?

Spitter is definitely a favourite of ours. Many of our keepers have worked with her for a long time and have built close relationships with her.
When you’re lucky enough to spend your days watching Spitter and her interactions with her family and other members of the community it’s hard not to respect and admire her.

Mutangi was the first giraffe calf to be born at Taronga Western Plains Zoo in Dubbo back in 1990. She is the oldest giraffe in a zoo in Australia and the second oldest in any zoo across the globe.

How did she get her name?

Mutangi means ‘first born’ and was chosen by her zookeeper at the time, acknowledging her special place as the first giraffe calf born at the zoo.

She recently celebrated her 30th… Did she get a present?

To celebrate the milestone, keepers put together a special enrichment wreath made of eucalypt. Giraffe are a browsing animal, meaning they eat tree leaves and branches, so the wreath was a fitting birthday present.

What is a giraffe’s life expectancy?

The life expectancy for giraffe in the wild is approximately 20-25 years, which can be higher for those in zoos.
Mutangi is now well and truly in her twilight years, and while she is a little slower, with stiff joints, and takes longer to eat, she is still in good health for her age.

What have been her impacts on breeding programs and research?

Mutangi has made a significant contribution to the regional breeding program for her species, with four generations of her offspring living in herds in zoos and wildlife parks across Australia and New Zealand.

When and where was Pitpa born?

She was born on 21 August 1987 at Taronga, and her keepers at the time called her Pitpa because it means ‘thorn’ in an indigenous dialect.

Pitpa is a very charismatic echidna. She comes over when called, loves a belly scratch and is extremely intelligent.
She is known as an ‘escape artist’, managing to escape from numerous exhibits around the zoo over the years. She can open latches and climb almost anything!

What has her impact been on breeding programs and research?

Yes, Pitpa often sunbakes and sleeps on her back! This is an incredibly rare thing for them to do, as their stomach is one of the only patches that isn’t covered in sharp spines – making it very vulnerable to predators. Not only do we see her doing this behaviour regularly, she has passed the trait onto her three-year-old son Leroy.

Where was Annie born and how was she named?

Annie came from the Bellinger River – somewhere around Bellingen in the state’s mid-north coast, 25 years ago. We’re not sure who named her, but it was after ‘little orphan’ Annie.

How popular is she with zoo visitors?

Platypus are always very popular at Taronga, but they are also very elusive. Not every visitor who comes to Taronga will be lucky enough to encounter one.
Annie has always been popular with anyone that has seen her though. Often the public seem to think she is a juvenile because of her size when she really is anything but that.

What is the life expectancy of the platypus?

We don’t know how long Annie should be likely to live for, but health wise she is still going strong. There isn’t much known about the life expectancy of a platypus.

Has she been important for research?

Annie has taught us a lot about platypus over the years. She was the first to be successfully hand raised, so she has been instrumental in helping us to understand how best to care for platypus in a zoo environment.

‘A tangible impact’
North Shore Living caught up with local tech entrepreneur, mentor, taekwondo instructor,...
Celebrating an icon: 90 years of the Sydney Harbour Bridge
The Sydney Harbour Bridge captured the imagination of Australians as a symbol of modernity...
Keeping angels on earth
Bayview’s Samantha Hollier-James is a charity powerhouse, founder, community leader and...
The row of a lifetime
Louis Hugh-Jones and three of his North Shore friends turned a crazy pub idea into a...
Manly by tram
Although travel to Manly is indelibly associated with the ferry, in the period from 1911 to...