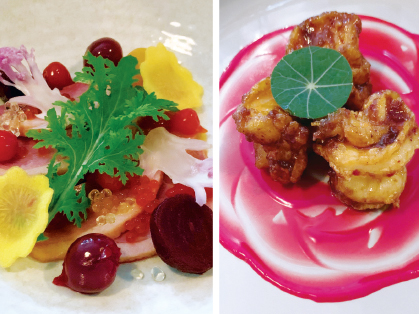 I should confess I hadn’t heard of Coya when Peninsula Living was invited to try its degustation – an ever-evolving menu, with the exception of the king prawn dish (and for very good reason), but we’ll come back to that.

As you walk towards this unassuming eatery at Cromer shops, you temper your expectations, I mean it sits between a bottle shop and grocer.

But as owner and chef Ashraf Saleh explains as we’re led to our table, location matters little when you offer “good food and service at a reasonable price”.

It only takes a taste of the first course – the sweetcorn and coconut veloute – to make us think the Paris-trained cook from the Middle East is being modest with his description of the food.

So too, with the service. At the table next to us sits an elderly gentleman, who we later learn dined at Coya every Wednesday with his wife before she recently passed away. Sensing the man’s loneliness, Ashraf provides companionship, going for walks and checking in on him.

“Dad can’t understand a single word Ash says,” his daughter laughs. “But he loves the company, and Ash lets him order anything he wants whether it’s on the menu or not.”

While we’re newcomers to this fine dining establishment, it’s clear that Ashraf and his wife Kit make a point of getting to know their customers. He cooks in an open kitchen in full view, and moves between tables, chatting with patrons throughout the evening.

It’s an experience as much as it is a meal. But back to the food, and each dish is exquisitely presented – the flair of Ashraf’s cooking is masterful. His cuisine is a sophisticated combination of local produce and Arabic flavours, delivered with high-end French technique.

The zucchini flower with four cheeses is rich and decadent; the jade bamboo rice with crab meat is citrusy and fresh; and the six-hour slow-cooked Marulan goat meat separates from the bone with nothing more than a tap of the fork.

The king prawns are in a class of their own though. The sweetness of the raspberry vinaigrette complements the subtle spice of the chilli jam to elevate the entrée to unparalleled heights. It’s no wonder the regulars have made Ashraf vow to make it a permanent fixture of the menu!

We finish on the Egyptian bread pudding dessert – a vision on a plate with its ruby tuile. Magnifique!